Five Tips for Cooking Meat in the Pressure Cooker

Cooking seafood in a slow cooker 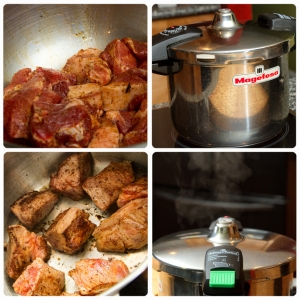 By using the pressure cooker, you can easily tenderize the toughest and tough meat cuts with ease. It is amazing how quickly the tough, chewy fibers turn into soft gelatin. But if you do it in the wrong way the meat will turn into nothing but a lump of tasteless meat. Here is Five Tips for Cooking Meat in the Pressure Cooker which will let you know what things to do or not to do when you are cooking meat in a pressure cooker.

Either Brown or Broil It

Before starting cooking the meat in the pressure cooker, you need to brown or broil it. Either do a quick pan-fry or sauté all around the meat or can broil it for a few minutes on a heatproof platter it. Just does it before you start braising the meat.

Do Not Drown the Meat in the Liquid

If you are cooking meat in the pressure cooker, then the number one enemy for the meat is dissolved because it sucks all the flavors. When you are cooking in a pressure cooker, there is almost no evaporation. Only 3 to 5% is liquid is evaporated, and when you compare it with conventional cooking, the evaporating rate is nearly 30%. So you cover the meat with liquid in traditional food. Just use enough liquid so the cooker can reach the required pressure. Then the cooker will do its magic and juice will be released from the meat itself, and the meat will braise in it.

Whenever you cook meat under pressure, please don’t be shy to add fresh herb that is available at that time. When you cook something in a pressure cooker, the cooker will infuse all the flavors of each ingredient altogether. The herbs will provide flavors and their oils to enrich your recipe. Just add them in whole including the stems before you close the lid, and the pressure cooker will take care of it.

Please take your time when cooking

When you are cooking meat recipes by a pressure cooker, use the general release. By doing so, you will bring the temperature of the superheat meat slowly down. So the juices of the high-temperature meat will not evaporate. So the meat will not turn into the low pile. If you don’t know what general release means then, it means that you turn the heat off. Then forget about the meat for 10 minutes that will allow the pressure to come down by itself.

Spread the lovePressure cookers are no doubt handy tools. They are so active in building …